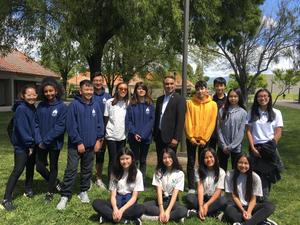 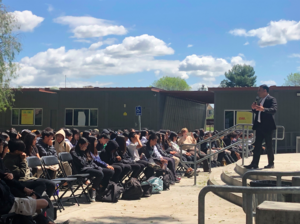 California state assemblyman Ash Kalra spoke with CCA students about his responsibilities as an elected official of the 27th Assembly District, encompassing the eastern quadrants of San Jose in northern California. Throughout his presentation, he discussed the steps to becoming an elected official, his college experience, and previous jobs he had that helped build to his current position in the government.


As the first Indian-American to serve in the California state legislature, Mr. Kalra discussed his passion and desire to help the environment and people of the world. He issued statements on the importance of voting, along with his desire to settle permanent voting booths in college campuses across the U.S. He discussed bills regarding the environment. Excited about one in particular, he talked about a proposed bill to exchange the little plastic bottles use by hotels for refillable dispensers, an act that would greatly reduce plastic in the environment.


Near the end of his presentation, assemblyman Ash Kalra responded to questions from CCA students. Students asked questions about how bills were made and how assembly people voted for or against specific bills. In regards to questions about a debate between capitalism and socialism, Mr. Kalra advocated for a balance between the two financial/political systems.


Overall, Mr. Kalra showed demonstrated the impact a well-meaning politician can have on the world and our local student body. CCA appreciates that he took time out of his busy schedule to speak with the students and staff at our school. Thank you assemblyman Ash Kalra. You are an inspiration for generations to come!