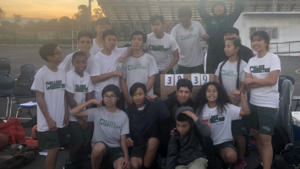 After an extremely close game against Shirikawa, CCA closes out the season with first place.

CCA’s 2018 basketball team made CCA history, finishing first place in the league for the very first time. Ending with a 5-1 season, CCA barely beat Shirakawa in a 39-38 victory.


The game started off with CCA scoring the first point, but Shirakawa fought back hard. The score bounced back and forth between the two teams, and by half-time, CCA was up by only a few baskets. Then, after the half, Shirakawa came came back like a whirlwind, dominating CCA by six points. It’s wasn’t looking good for the home team, but CCA didn’t give up. CCA was awarded several free-throws, and 8th grade player Ethan made the shots. Working together and playing hard, CCA regained the lead and ended the game with a 1 point lead and victory over the opposing team.


After talking with several of CCA’s players, they said the game was extremely challenging, because it seemed like they might lose. Then, they came back, and that was very rewarding.


Overall, players reported the season as fun and exciting. They said it was fun to hang out with friends and play a team sport which they all liked. Players attributed wins to hard working athletes such as Khiem, as well as the girls on the team. Ryan made a lot of points in several games, but overall it was a team effort and everyone was needed if they were going to take the crown.


At the end of the interview, several of the players noted the importance of hard work and teamwork. “It’s a team sport,” they said. “Never give up.”


Great work, players, and congratulations! CCA is extremely proud of all that you’ve achieved.